It's time to end th he silence about #PCOS

It's time to end th he silence about #PCOS

We are at a crucial crossroads with PCOS Awareness.. while there has been an increase in media attention and physician awareness... we are still in the dark ages.

Polycystic Ovary Syndrome or PCOS affects approximately 14 million women in the U.S. alone and 200 million worldwide.  It is a significant health concern that warrants national attention and government support so the 70% of women with #PCOS who are undiagnosed get the proper support, diagnosis, treatment and education to healthier lives with the syndrome.

The lack of resources, funding, education and support contributes to many of the epidemics facing women's health today....

4 in 10 cases of #diabetes can be linked to PCOS

34% of women with PCOS have #depression and 45% have anxiety

one in three women with PCOS has an abnormal glucose tolerance

About 6% of PCOS patients have bulimia, compared to about 1% of other women

Between 50% and 70% of women with Polycystic Ovary Syndrome  #PCOS experience Insulin Resistance.

PCOS can also lead to

Yet, less than 0.1% of government funding is spent on PCOS research, diagnosis and treatments and unless infertility is being addressed many women and teens will continue to go undiagnosed!

We need  yo end the silence about #PCOS by sharing voice and empowering the PCOS community and supporters to speak up and speak out for change and diginity, to ensure this syndrome receives the proper recognition and resources for women to make informed decisions about their health and ultimately live happier and healthier lives with PCOS.

The online PCOS Petition is gaining recognition and signatures urging legislators, organizations and change makers to look at the syndrome more closely and make PCOS a national health initiative...

Learn more about the initiative and read the over 10000 reasons why awareness is important.

What it's like to live with #PCOS
Author:Ashley Levinson
@PCOSgurl

Many people have read my posts about #PCOS but I often wonder if they really truly understand what life with PCOS is like for those living with this syndrome.

The best way I can explain it to someone who is not living with it is it's like being in a glass box..... sure people can see you but they can't hear you, they can't feel what you feel and they can often put you on aloo shelf and invalidate you if they can't understand.

The truth is, many of us feel trapped inside this glass box... often screaming..trapped in bodies dealing with symptoms many can't see and the symptoms that are seen often make us feel like we are being judged, like it is somehow our doing our fault..... yet we can not escape it...

What PCOS (polycystic ovary syndrome) is, and what it does to women who have it, is complicated to explain as symptoms and severity of the syndrome can vary from person to person.

Even though #PCOS was first recognized over 75 years ago, we are no closer to understanding its cause or its treatment. There is no singular test that can conclude whether a woman or girl has the syndrome instead it is a collection of symptoms, history and diagnostic testing.

As a result once a doctor concludes it is Polycystic Ovary Syndrome, they manage the symptoms to prevent long-term health consequences such as infertility, diabetes and heart disease.

As it currently stands, PCOS is the most underserved health issue affecting women with less than 0.1% of NIH Funding in the United States  being dedicated to PCOS research, diagnosis and treatment.  Furthermore, although there are guidelines that have been set by multiple organizations with regards to diagnosing PCOS, there is still no universal criteria or category for the syndrome. Until this is addressed, many women will continue to suffer needlessly wondering what is wrong with them.

PCOS Awareness has to happen now to ensure women and girls do not have to go through another day, month or year of silent suffering..... Please join the PCOS Community in learning more about this syndrome, make your voice matter for millions of women worldwide who only ask that people to realize Why PCOS Matters.....

It's time to #SpeakUp for #PCOS 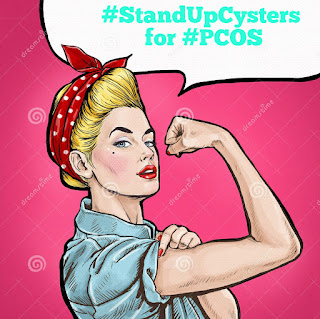 I am so proud to announce we have reached another milestone!!!!

While we are thrilled at reaching this goal, we still have a lot of work to be done...

For legislators to even begin to take this petition seriously we need a minimum of 25K signatures from patients, constituents, doctors and health care leaders...

May seem like a daunting task but on Facebook alone there are some PCOS groups and pages with over 50,000 members.....

We all can agree that things need to change for PCOS.....

The fact is unfortunately many of us talk about change but, many dont understand what the point of PCOS awareness is, how they can change how women with PCOS are preceived or they've given up and don't want to deal with the constant criticisms from those who believe PCOS is "made up" and not a serious medical condition.

Trust me I've had my fair share of family and friends who mean well, refuse to accept my illness or just plain don't get it!

It's time we drown out these sayings and voices and start getting louder as individuals and as a community....

We all want better health, treatment, respect but like with anything else we need to make our needs known and if we aren't willing to stand up for change, change won't happen, that's the simple truth!!

We have to get the word out to help our community and PCOS patients be properly diagnosed, managed and help our supporters know how to be more  supportive to someone who is suffering with PCOS.

There is an estimated 70% of women with PCOS who are undiagnosed!

We need people to know untreated, this syndrome can cause major health complications....

Now I don't know about you, but I think these complications are definitely worth raising some awareness for!

Additionally all the symptoms women deal with on a daily basis are enough to make anyone want to raise their voice and scream!

PCOS is unique because no two women have the exact same symptoms. Therefore defining diagnostic criteria is difficult!

It is because the symptoms and the severity vary that often the initial diagnosis is missed for many women with the syndrome.. doctors tend to look at symptoms individually rather than collectively and because there is no singular test for PCOS, it becomes a diagnosis of exclusion.

our greatest strength and our strongest voice comes When We Stand Together....

#PCOS is an all-encompassing syndrome and there is nothing to really define the totality of it therefore, we need to work together to help others understand...

Also stand up and speak out
join #TealEggsforPCOS  Campaign

Your Family history plays an important role in your #PCOS diagnosis!

Your Family history plays an important role in your #PCOS diagnosis!

The cause of #PCOS is unknown. But, #genetics, could play a role.

PCOS tends to run in families; it is important to ask about family history as there are often genetic markers beyond PCOS that may indicate a predisposition to a woman having PCOS such as #diabetes, #cardiovascular disease, high cholesterol, metabolic syndrome, hypertension and impaired glucose tolerance.

Women who have a first-degree relative (a sister, mother or daughter) with #PCOS have a 35 to 40%  chance of developing the condition.In fact, some believe if a mother has PCOS and her daughter is showing signs of it, she should be evaluated by her pediatrician or by an endocrinologist for the syndrome.

But, its not just daughters, the sons of women with #PCOS tend to have a greater risk for obesity and diabetes, which are complications of PCOS. Men can also inherit the genetic abnormality that in women would lead to #PCOS with symptoms such as thinning scalp, excess weight centered in abdomen, adult acne, skin tags and dark skin patches... in men it is usually referred to as metabolic syndrome as the do not deal with the reproductive issues of the syndrome.

Finding the proper PCOS diagnosis can be easy if physicians know what to look for... which is why definitive guidelines are so important! Organizations such The AES-PCOS Society, AACE and The Endocrine Society identify these as:

Obtaining blood samples for a variety of hormones, including those produced by the ovaries, adrenal glands, pituitary gland and thyroid gland.

A full physical examination and screening for cholesterol, triglycerides, glucose and insulin.

The mystery has to be solved, due to the fact that PCOS can be associated with a number of serious medical conditions, frequently associated with decreased sensitivity to insulin (i.e., insulin resistance), which in turn leads to PCOS  risks as follows:

9% increased risk for Endometrial Cancer due to excess estrogen production

There is another factor which impedes PCOS diagnosis....

There is a stigma attached to many of the symptoms of PCOS, which may inhibit a woman from discussing symptoms with her doctor as they cause anxiety and depression, which are prevalent in women with #PCOS.

Therefore, Public information and awareness about the symptoms and the serious nature of the disorder are crucial to identifying women in need of treatment.

We are at a crucial crossroads with PCOS Awareness.. while there has been an increase in media attention and physician awareness... we are still in the dark ages.

Polycystic Ovary Syndrome is a significant health concern that warrants national attention and government support so the 70% of women with #PCOS who are undiagnosed get the proper support, diagnosis, treatment and education so they can live healthier lives with the syndrome.


Hello! Welcome to #PCOSchat1! Let's start with Q1 What is PCOS?


A1 PCOS or Polycystic ovarian syndrome is the most common hormonal disorder in women.


A1: #PCOS is one of the leading causes of #infertility!!!


Anyone want to guess how common PCOS is?


Medication can help regulate egg release, regulate menstrual cycles, and make it easier for women with #PCOS to conceive #TTC


@lorashahine Do you treat a large number of women with #PCOS #Infertility?


A3: Collection of signs and symptoms – not everyone has the same presentation.


@lorashahine - question to you .... What are the more common symptoms of #PCOS ?


@PCOSGurl What symptoms is Amber having?


Getting close to the end of chat time.


Final Q: Is there a cure for PCOS?


A: Not yet. Treatment focuses on symptom relief for now


·Add to other Moment


Will inositol be affected by the Provera? I actually have a bottle that's 500 mg


@Amber_Aquarius this can be through exercise, nutrition, supplements and when needed medications


Provera should not be affected... But I suggest you look at high quality #insitol those vitamins may not offer a beneficial dose


While it may be more expensive, it is well worth the investment to make sure you get right combination try @Theralogix Ovasitol 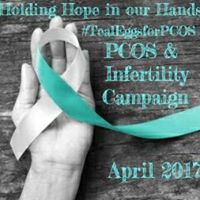